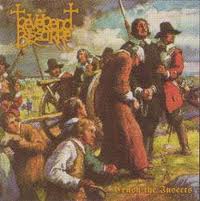 To launch the UK branch of their record label, Spinefarm have delved into the vaults and dug out a couple of reissues, the first of which is from Finish doom legends Reverend Bizarre. Originally released in 2005, Crush The Insects may not be the dustiest of records in the vaults, but hey, it’s a classic slab of funeral paced doom so there’s no problems there whatsoever.

Taking the Black Sabbath formula and running, well, plodding very slowly along with it this, their second, album gets to the point right away, long notes ringing booming out for the intro to “Doom Over The World.” Shifting into a slightly higher gear things get are driven forward by some thumping bass lines and effective drum fills. A rocking start to a great album it finds frontman Albert Witchfinder’s vocals shoved to the fore, clear and well pronounced his tales of darkness and occult are the perfect side-dish to the music contained within. You actually couldn’t ask for a better mission statement than “Doom Over The World,” really. It’s a rolling song

that’ll have you wondering why you’ve never checked these guys out before, or if you have, why you haven’t listened to them in so long.

Over the course of eight, lengthy songs

, Reverend Bizarre never stray far from the formula laid out by their forefathers in Sabbath, which means there’s some great riffs knocking around in here and a pure retro feel at times. If you’re unfamiliar with Crush The Insects this is your perfect chance to become bosom buddies, but don’t be surprised if you’re left thinking this should be decades old instead of actually fairly recent. There’s nothing fancy going on here at all. This is proper traditional doom in the truest sense of the word, candles burning slowly in the background, Albert Witchfinder sounding like he’s reading Poe in an empty room decorated sparsely with silver, possibly inverted crosses and drinking wine

The somber production allows every note to breathe fully, the drums lending extra weight beneath the cobweb covered solos and fuzzed-up, distorted bass lines. “The Devil Rides Out” is a punchy number that calls to mind Electric Wizard, the big, repeated riff shoving the whole thing onwards like a heavily laden, yet out of control cart. “Cromwell” continues in this fashion before “Slave Of Satan” reduces the pace to a crawl, deep sustained bass notes bouncing around against the dank sepulchre walls.

Moody and dark throughout, yet still boiling over with that unique essence you get from doom which somehow when it’s done right makes you, against all the odds, feel good. Crush The Insects is a rich, interesting, powerful album which should be indulged in before your next Lee Dorian fix comes around.