Resonance – Out of the Silence (Inverse Records) 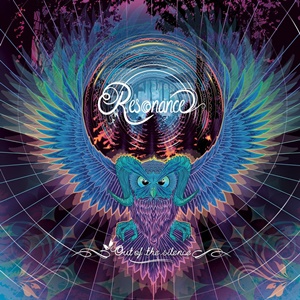 For a genre developed in America, metalcore seems to have broader life in many overseas acts. Possibly due to their open-minded approach which doesn’t always focus on the cliché aspects, you get to hear more depth and diversity band to band, as they seem to concentrate on establishing their own niche or angle for differentiation. Finnish quartet Resonance on their debut full-length Out of the Silence embrace that philosophy – incorporating a bevy of modern djent, progressive, and ambient/atmospheric aspects to their fierce metalcore platform – which could aid their cause in making their presence felt.

The band have a unique way of approaching the heavy screams and ‘breakdown’ aspects to their sound – within “Another World” for instance, flange-like guitar effects appear scattershot against a slower, steady snare/kick combination that builds into layers of tremolo-picking towards the song’s conclusion. At other points, serene clean combinations and swirling keyboard effects allow Esa Salminen as a singer to express his verses in a restrained, almost emo-laden way – “The One” also containing guest female vocals from Sarah Strömmer to raise the emotional magnitude of the arrangement. When the band choose to be heads down heavy they always add in some crunchy accents or left-field transitions, where occasionally the rhythm section carries the groove into progressive pastures – check out the calmer switch up for “Faded Memory” which allows for some breath taking melodic lead breaks and a guttural bellow from Esa. It’s as if Resonance take into account some of the dotted note abilities of acts like U2 and Big Country for outside the box tastes, while incorporating a love of Periphery, US metalcore, and European finesse to create these monster, groove-oriented songs that pulsate and invigorate in short three-four minute bursts.

If there is a small weakness it’s in the occasional off key singing Esa employs when trying to be a bit more alternative/emotional during parts of “Shattered Inside” – he’s better off being calmer and more dark rock/gothic as displayed in “Lie” when he chooses to switch out of the caustic, blood bursting screams. Between the progressive, djent-like grooves and circular melodic guitar taps/runs, Resonance has established an addictive brand of metalcore that can only get stronger as more live work and seasoning take shape.