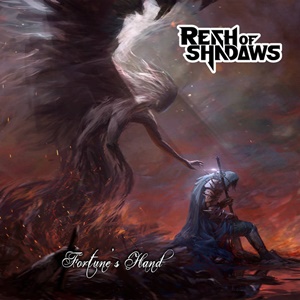 These days you don’t need to form and finish a project/band with members all in your local area. Case in point: Reich of Shadows, starting with main man Cody Pelchat as songwriter, bassist, and guitarist since 2008, and filling in the missing parts of vocals and solo work through outside support thanks to the internet. Fortune’s Hand as the second full-length is the follow-up to last year’s At Last, making up for lost time considering only two demos hit the streets before this. Three vocalists tackle the material, plus supplementary lead break work includes help from Jimmy Pitts (Eternity’s End) on keyboards, and guitar solos from Mega Colossus’ Stephen Cline and Klaymore axemen Lee Prisby and Dan Sudano giving these ten tracks a firm foundation based in the heavy/power metal genre.

The template of Reich of Shadows sits in that traditional/power style – mid-tempo to slightly faster riffing and solid metal mechanics that combine everything from Maiden finesse to occasional Iced Earth gallops. The eerie keyboard/spoken word opening for “Dream Lock” gives the arrangement a bit of an 80’s synth flair, although as the arrangement develops there’s an epic march measure that sits in the Dio-period Sabbath meets Manowar territory. When Cody chooses to be a little more progressive and flashy with his hooks, the results are highly engaging – check out the opening sequence to “Nothing to Undo” before the mountain-top bellow vocally captivates, or the tight keyboard/guitar interplay and leveling up that occurs during the 7:36 title cut, where the epic atmosphere takes you on an elevated trip. Yet for all of the ambition that takes place from beginning to end, you can’t help but feel that these songs would have been that much better with a thicker guitar tone plus a proper human drummer to give it that sophisticated touch in certain sections (closer “Traitor in Disguise” the easiest example) and a bit of vocal direction/ pitch control for some of these singers would also have been in order for continuity’s sake.

Fortune’s Hand showcases potential not fully realized – a case where the heart and intent are evident, it’s now more a question of pulling everything together for the strongest output track to track.