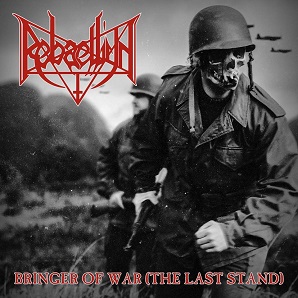 Like their countrymen Krisiun, Rebaelliun play a style of “falling off a cliff; let’s meet at the bottom” death metal. As in, their chaos is somehow controlled by competing riffs and drum action where the two appear to be on totally separate wave-lengths, only to always end up at the same place at the end. It’s an innovative way to play death metal, something initially spurred by Morbid Angel during the early Vincent years, only to be expanded upon. Now in their third post-reunion year as a band (they broke up in 2002, but got back together in 2015), Rebaelliun are bona fide veterans with plenty of pop left, as evidenced by the stop-gap Bringer of War (The Last Stand) EP.

Featuring four new cuts, three live jams and a perfunctory cover of Morbid Angel’s “Day of Suffering,” Bringer of War, is largely a jarring effort, especially the new tunes. “War Cult Anthem,” and “There Is No Horizon” supply the necessary riff detonations and drum blasts, sounding off a cataclysmic title wave, for lack of a better term. But these songs have an identity, probably because Rebaelliun does in itself, the somewhat exotic, bristling, fast-paced counterpoint to vintage death metal, mastering the Morbid Angel cover, making one wonder how they would handle Steve Tucker-era material.

The live cuts here are a bit touch-and-go, which is fairly commonplace for death metal live recordings. (When was the last good death metal live album anyway? Entangled in Chaos?) But, the four new jams and the Morbid Angel cover are, as you would expect, are furious, lateral extreme death metal motifs, showing that the Brazilian DM is here to stick around…