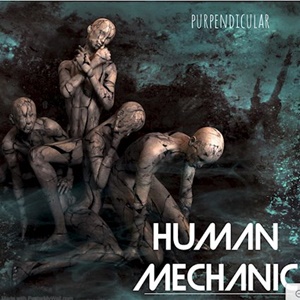 It’s quite commendable to go from being the most booked tribute show to Deep Purple in the world to collaborating with the drummer of said band Ian Paice in the group as you develop original material. That’s the case for Purpendicular – founded in 2007 by Irish singer Robby Thomas Walsh, they’ve released two full-lengths to date and also had support from veterans in the scene like Roger Glover, Tony Carey, and Neil Murray among others. Human Mechanic is the latest offering, delayed for a couple of years because of COVID-19 – delivering ten tracks of groove-infused bluesy hard rock with funky and Hammond organ aspects still piping through strong.

The organic nature to the musical foundation of this quintet allows these musicians to present ideas that branch off in logical sequences – Robby’s voice a mixture of grit, power, and personality, carrying with him a mix of Ian Gillan plus Dan McCafferty (Nazareth) at the helm. There’s a calm comfort to the guitar lines, steady rhythm section backbeat, plus pulsating Hammond keyboard passages that allow “Ghost” to seep easily into the recesses of your brain, Ian adding the appropriate tasteful fills to accent Herbert Bucher’s jazzy, blues-infused breaks while Nick Fyffe provides additional mesmerizing bass lines. “TV Stars & Internet Freaks” contains hair-rising, circular guitar runs as well as a killer rhythm section shuffle, perfect for Robby to dance around in his melody choices from a softer, sultry register during the verses while rising to the occasion during key chorus parts. The epic, 70’s nature of the band comes to light on “Four Stone Walls” – the guitar/organ interplay reminiscent of Perfect Strangers-period Deep Purple, Christoph Kogler using fleet of finger tricks in his keyboard tradeoffs with Herbert’s guitar mastery. Complexity isn’t the main objective for this group – they would rather find the best hook/melody combination to launch forward in a cohesive fashion, making the title track and “The Nothing Box” sterling examples of bluesy hard rock bristling with class.

Purpendicular has the most appeal for those with receding, silver hair lines that probably seek the comfort of their homes in bed well before midnight. There’s still a market though for those musicians as they haven’t lost their creative fire, and Human Mechanic does have that 70’s/80’s appeal that will attract attention over time.

Purpendicular – Stepping Out of the Shadows