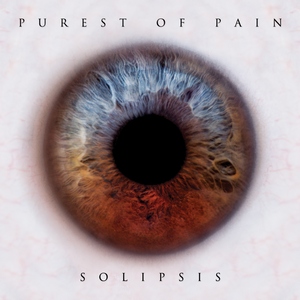 You may know guitarist Merel Bechtold due to her involvement with bands like Delain, MaYan, and The Gentle Storm. But none of those really display Bechtold as a songwriter on her own. Purest of Pain is her first band, coming into existence ten years ago, and finally releasing their debut album, Solipsis (they did have a demo and EP along the way).

Purest of Pain is a groovy death metal entity that seems to borrow from the old just as often as the new. In turn, it creates something that feels monstrously heavy yet comfortably atmospheric at the same time. It’s completely symbiotic in nature, one side never overpowering the other. The older aspects lean more towards melodic death metal, with plenty of catchy melodies coupling with the driving grooves. It’s not quite Gothenburg-ian but there is still a delightfully flashy (yet tasteful) approach to songs like “The Solipsist” and “Tidebreaker” when the melodies unload. Yet the more modern groove is not about to be undermined by this – instead “Vessels” takes things in a more punishing way, with near-hypnotic and driving riffs at the forefront of the attack. Going along with the snarling approach is vocalist J.D. Kaye, who barks in surprisingly intelligible fashion – heightening the anger when called for (“Crown of Worms”) and able to add a darker element to the more atmospheric sections (“Terra Nil”). Frantic yet playful tracks like “Noctambulist” round things out and are able to intertwine both sides of the band together in excellent fashion. One additionally striking thing about the music overall is how the length is meant to accommodate each song – tracks ranging from 2-6 minutes seem built for their distinct purpose, and never over/under do it.

Wisely focusing on groove and melody above all, Solipsis captivates the listener with a more unique vibe than one might initially expect. It’s distinctly heavy, but the enticing guitarwork broadens the album’s appeal to a wider net than the usual death metal crowd, and is sure to burrow its way into your ears more with each listen. Purest of Pain has crafted an all-around pleasing debut that oozes an even greater potential moving forward.