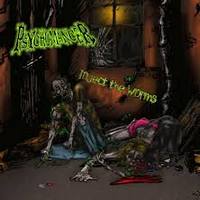 Next in the coming from out of nowhere zone is Psychomancer, who bring us their latest EP, Inject the Worms. Their first piece of music since 2007, it was a pleasant surprise after Microsoft Paint-esque artwork that adorns the album. But, just another case of don’t judge a book by its cover.

Psychomancer deliver a dose of death metal that just sticks around just long enough. While the term “no frills” may apply, there are some outside influences that spice things up and bring up the diversity quotient past what you might be expecting. “In Shackles Insane” begins quite feral enough, with a Dying Fetus inspired bit of groove that’s hard not to get into. The title track ushers in a bit of melodic death metal moments that give more “epic” nature to the songs opening, before more thrashy death metal pushes to the forefront. There’s even an acoustic opening to the EP’s final track, “Abhorrent Wings of Decay,” that provides some mood without sounding out of place. Later in the track, things slow down and focus on atmosphere and additional melody once more. The only low point of the album is the super clichéd repeating line of “No one gives a fuck about you” towards the end of the title track.

For those looking for a bit more groove with their death metal bite, Psychomancer should satisfy. It’s a solid release with plenty of energy and memorable riffing. Isn’t that what everyone wants from a death metal album at this point?