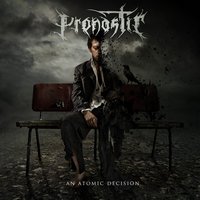 After coming across Pronostic’s 2012 debut, Deviated Inner Spectrum, last year on Bandcamp, it was thrilling to see that the band was coming out with a follow-up. Sporting a killer cover from Colin Marks and some behind the boards’ work from Cryptopsy’s Chris Donaldson, Pronostic is back with a vengeance with An Atomic Decision.

Describing themselves as technical melodic death metal, one would be inclined to agree with that designation. This is material that will find plenty of appeal with fans of The Black Dahlia Murder, Aborted, and Allegaeon. There’s an almost European sense of melody in these songs (Detonation comes to mind in this regard), utilizing an unrelenting pace while executing some surprisingly catchy riffs in between some more aggressive ones. A number of the riffs fall under the technical category, yet they retain a more “human” tone and never go too far over the deep end. Then there’s the shredtastic solos that you are often privy to (see the title track or “Menstrumental”), which also manage to convey a sense of melody as well. Ultimately, Pronostic’s greatest strength is their sense of being able to balance chaos with order – keeping An Atomic Decision feral enough to win over the extreme crowd, while keeping the riffs sweet enough for those with a keen sense of melody. Songs like “Becik” best illustrate this dynamic, and when combined with the great modern production, offer plenty of reasons to return to this album regularly.

Don’t let the “melodic death metal” descriptor scare you away from this one. An Atomic Decision snarls with plenty of firepower at the helm, and the melodies within never water it down. The death metal crowd should rightly be eating this one up.