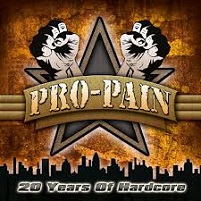 “Dogged” would be an apt term for Pro-Pain bassist/founding member Gary Meskill. The New Yorker has seen numerous lineup changes, trends, and everything else come and go since the band formed 20 years ago, so to say that the band’s commemorative 20 Years of Hardcore is an achievement is a gross understatement. Meskill’s determination (of the dogged variety) and unwillingness to deviate from the band’s core sound is probably why they’ve been able to stick around for so long. That, and Pro-Pain doesn’t suck.

both in audio and visual form, 20 Years of Hardcore gives the proper rundown of what Pro-Pain is all about. And what they’re all about is chugging, street-ready anthems, with Meskill’s working-man lyrics and imitable bark rounding things off. The occasional melodic undercurrent has long helped the band’s cause, doing its part on the excellent “Hands In the Jar” and romping “True Liberation.” But at the core, Pro-Pain will always be a bare-knuckles band.

We didn’t get to see the visual portion of this, but the live stuff from aconcert

in the Czech Republic is pretty top-notch, with an assortment of bruisers like “Neocon,” “The Shape of Things To Come,” and “Let the Blood Run Through the Streets” being the go-to songs here. It’s obvious the live platform is where the band’s bread and butter is, so the energetic “Can You Feel It” and “Foul Taste of Freedom” all go down quite well.

Utterly mandatory for the legions of fans (most of them are across the band) that have followed the band, 20 Years of Hardcore is a testament to Meskill’s unwavering vision. Few bands

of this nature are this reliable. You always know what you’re going to get out of Pro-Pain. And that’s fine.