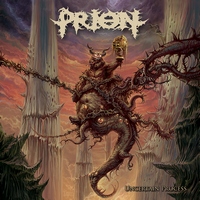 After a seven year absence, Argentian death metal squad Prion has returned with their third full length (following up 2008’s Impressions). With a cool scientific name in tow (a super-simplified explanation is that a prion is a protein that works similarly to a virus – there’s your science fun fact for the day), it’s safe to say that if traditional death metal is your bag, Uncertain Process is an album you’ll enjoy.

The first two bands that come to mind when playing the “sounds like” game would be Morbid Angel and Hate Eternal. Prion plays straight-ahead death metal that relies upon a mountain of blast beats and intricate riffing structures to demonstrate its power. If you are thinking that you’ve probably heard this one before, you wouldn’t be wrong, but what Prion does is still worthy of note for the death metal connoisseur. There are tracks like “Anhedonist” that veer off of the blast-ridden formula and utilize some darker and moodier moments to give the album some needed contrast. Even during the faster moments, this is an album that demands repeated listens to really get the most out of the band’s songwriting. This is something that is established early on in lead-off track “Power Obsessed,” but solidified by choice cuts such as “End is Near” and “Chronic Disease.” The album finishes surprisingly with a blistering death metal cover of Depeche Mode’s “Never Let Me Down Again.” An odd choice for a death metal band, but it does work quite well.

Uncertain Process should put Prion back on the radar for a number of death metal fans. As an added bonus, the album comes with a DVD of a full set that the band performed in 2013 in Buenos Aires. A good amount of bang for your buck!