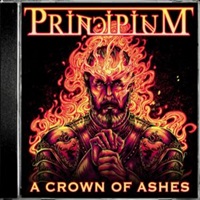 Hailing from Salt Lake City, Utah, Principium is a relative newcomer as a five-piece playing progressive metal since their origins in the spring of 2014. Their debut five song EP A Crown of Ashes would be considered full-album length in some punk and speed/thrash circles at 33 minutes – but this is progressive music we are discussing here, where extended instrumental sections and time signature/segment shifts become the norm. Fortunately, this group propel themselves into a difference-maker because of what they choose to elevate rather than sticking to tried and true technical prowess/ intricacy principles.

It’s not often that bass players get significant solo spotlights in the middle of a song, or we hear high pitched screams that rival Jon Oliva during Hall of the Mountain King prime – which take place out of the gate on the title track, so kudos to Breck Hauser holding down the bottom end proficiently and John Yelland for his massive vocal range. Drummer Casey Fredrick gets a steady eight bar measure as well to whirl back and forth on his kit on “With the Wind as Your Breath”, proving he’s capable to be powerful and extreme at times in his responsibilities. Musically the band reside in that late 80’s / early 90’s progressive metal field – melody being driven through vocal harmonies and solid axe interplay between guitarists Robby Pinelle and Mike Murphy, a descendent of acts like Queensrÿche and the aforementioned Savatage, along with a power charge that comes from an Iron Maiden or Dio-era Black Sabbath stance.

Principium gaining vocalist John Yelland (also a part of Judicator) allows his seasoned, higher falsetto nature and expertise on proper harmonization to gain even better clarity and appreciation, most evident on the 7:11 “No Price Too High”, where some of the chorus harmonies contain a choir-like meets AOR sheen. The only negative I see in this is the band’s choice of doing “War Pigs” as a closing bonus cover. Don’t get me wrong, the performance is spot on (especially giving Breck ample room to jam during the longer instrumental sections), it’s just that this scribe would have preferred a possible surprise instead of a tried and true classic that’s been done so many times by other bands through the years.

A Crown of Ashes will be a fine addition to most progressive metal collections, and it should be interesting to see where Principium goes direction-wise on future outings.