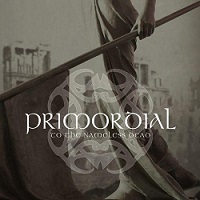 There have been few, if any hiccups in Primordial’s run as Ireland’s exo-de-facto metal band. Maybe 2002’s Storm Before Calm ranks as something of a disappointment, but that was the album that succeeded the near flawless Spirit the Earth Aflame, so we’ll give these lads a free pass. Glance back at albums like the aforementioned Spirit the Earth Aflame and 1998’s A Journey’s End and you’ll find Pagan metal at its finest, bolstered by the grim, world-weary outlook of singer A. Averill and those dirty Opeth chord structures providing the foundation.

As for To The Nameless Dead, it’s more of the same, sprawling, bare-bones, primal folk-black-whatever we’ve come to expect from one of metal’s most viable entities. Opener “Empire Falls” is pure Primordial, with Averill spitting some serious diatribes about the eventual downfall of the world while the guitars of MacUiliam and O’Floinn provide the means and the way with some dastardly chord movements.

The ominous and haunting “Gallows Hymn” glides with focused anguish, as Averill howls at the moon, it seems, in tortured agony. Same bodes for “Failures Burden,” but it isn’t until the menacing “Traitors Gate” is when Primordial lets it all rip, attacking and pillaging with an array of melodic riffs, blast beats, and primal intensity that is hard the duplicate in this era of Pro-Tools and copycats.

To The Nameless Dead is highly recommended, as is most of Primordial’s catalog. Suffice it to say, this band sticks out like a sore thumb and if we had another 50 bands with the work ethic and ethos of a Primordial, then we wouldn’t have this glut of shitty, throwaway bands. Raise one high… here’s to you, Primordial.