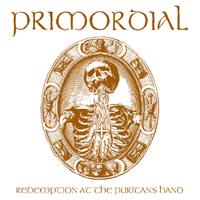 The face of Irish metal, Primordial are coming off a rare spell of inactivity, with Redemption At the Puritan’s Hand being their first proper full-length since 2007’s To the Nameless Dead. Not like the band has fallen off the grid – the reissue series of their back catalog has been going on for the last year, but Redemption is perhaps the most anticipated album to date from A. Nemtheanga and crew.

For all intents and purposes, Primordial refuses to budge from their post-black metal sound, of which there is a reliance on murky chords and atmospheres that reflect the hardship and plight of their homeland. Most bands can’t pull this off, and with Primordial, you can actually feel it, right from Nemtheanga’s earthy bellows, some of which are his most potent to date – just take a gander at his howling on “Bloodied, Yet Unbowed.”

Meanwhile, there’s a handful of throwaway songs here, namely album opener “No Grave Deep Enough,” “God’s Old Snake,” and “The Black Hundred,” all of which indicate how ineffective the band can be when there’s an absence of a dark and throbbing foundation. The saving grace here is “The Mouth of Judas,” a restrained, pointed moment that ranks in the pantheon of “The Dark Song,” and “Gods to the Godless” in terms of songs that show how emotionally wracking Primordial can be when prodded.

It’s hard to disseminate how many bands have piggybacked off the sound Primordial have been championing for so long, and while the Pagan metal scene is becoming more clogged by the day, the Irishmen prove they have bounties of spirit left. Redemption At the Puritan’s Hand doesn’t approach the mandatory works of 2000’s Spirit the Earth Aflame or the unheralded The Gathering Wilderness from 2005, but heretics be damned, Primordial aren’t going anywhere anytime soon.