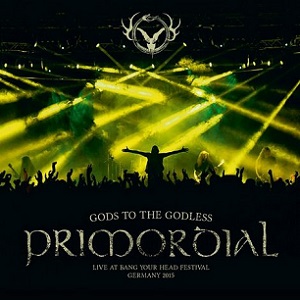 Primordial’s sterling track record and stellar live reputation would suggest something like the double-live effort Gods to the Godless was a long time coming. Recorded at the band’s 2015 appearance at Germany’s Bang Your Head Festival (usually affixed with three exclamation points, by the way), Gods to the Godless captures the Irishmen heaving up their usual array of distinct metal, led by the rallying war cry of the indomitable Alan Averill. And as far as live platters go, this one sticks the landing.

Touring off the back of 2014’s splendid Where Greater Men Have Fallen, it’s of little surprise said album is on prominent display, most notably the wondrous “Babel’s Tower” and hearty title track. Averill, to his credit, sounds bold and vociferous, a frontman who clearly doesn’t need studio trickery or vocal gimmicks to convey his points. Of particular note is “As Rome Burns” and “No Grave Deep Enough,” two mid-period Primordial cuts that symbolize their ability to capture flowing, sub-black metal chords with brave atmospheres.

Because so many of Primordial’s songs are epic (if you will), Gods to the Godless never quite reaches a climax, probably because it doesn’t have to. Instead, it’s a near “Greatest Hits” collage, a spirited run through the catalog of one of Ireland’s most venerable outfits. From the galvanizing push of “Gods to the Godless” (which may remain the band’s penultimate moment) to closing crash barrage of “Empire Falls,” this is a live album that fundamentally delivers.