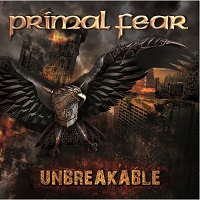 A band that should never, ever deviate from the course, Primal Fear has made a career out of essentially doing the same thing over and over since their eponymous 1999 debut. And frankly, that’s fine and dandy, for the Germans know their way around a Priest-on-power metal tune like no one else. There has been some alterations to the band’s sound, like 2005’s totally underrated Seven Seals, but for the most part, PF has been up to their usual tricks, and on Unbreakable, it’s more of the same fist-pounding, Teutonic metal glory.

Cerebral, forward-thinking Unbreakable is not, rather, it’s chalk-full of Euro-friendly anthems that are immediate as they come. Right out of the gate, the band hits with “Strike,” which includes a nice little twin-lead dual between guitarists Alex Beyrodt and Mangus Karlsson. In fact, the Beyrodt/Karlsson team is downright deadly at certain points, most notably on the speedy “And Then There Was Silence” and lead single “Bad Guys Wear Black.”

Singer Ralf Scheepers is a marvel, and he shows why on the fun “Give ‘Em Hell,” partially-cheesy “Metal Nation” (yes, we like metal as much you, Primal Fear) and “Marching Again.” Able to adapt to virtually any type of power metal setting (his choices are limited, obviously), Scheepers should be getting more credit for his work, rather than being more known for the guy who helped launch Gamma Ray and was the runner-up to the Judas Priest vocal slot in the mid-90’s. The man is hands-down one of the best power metal singers

Judgment has long been passed on Primal Fear and certainly there is a swath of individuals who think the band has done nothing of value since 2001’s Nuclear Fire. We’ll balk at that idea and point the all-around fun, easy, and metalnature of Unbreakable. Seriously, don’t contemplate change Primal Fear…the world is better for you doing the same thing over and over and over…