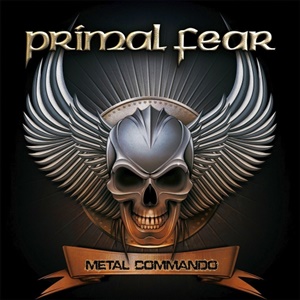 Returning to their original label Nuclear Blast who first gave these Germans a chance to launch on a traditional /power scene that was in need of a jolt during the late 90’s, Primal Fear are a story in seasoned musicians, passion for the cause, and perseverance through it all. Trends be damned, they’ve released some solid discography over their 23-year plus history – this scribe favoring Nuclear Fire (2001), Seven Seals (2005), and Delivering the Black (2014) as three consistent playbacks from the catalog. Now arriving at studio album thirteen with Metal Commando, the first for Gamma Ray/The Unity drummer Michael Ehré behind the throne, it’s easy to hear that these veterans continue to strive for songwriting diversity under that anthem-like template, also adding in a couple of new tricks to the fold while keeping the Priest/Accept-style power riffs and strength on high.

Five songwriters in the band ensures the best material rising to the top – a democratic approach that yields crushing headbanging material from the first single “Along Came the Devil” or the commercial-leaning mid-tempo effort “Hear Me Calling” that shifts from arena-styled riffs to calmer, clean instrumentation and Ralf’s softer melodies versus the titanic, shimmering high-pitched chorus. When you want lower tuned crushing guitars barreling over the aural landscape, look no further than “The Lost & the Forgotten”, while the left-turn acoustic-driven ballad “I Will Be Gone” allows Ralf Scheepers a chance to deliver tender words and melodies in a reflective manner. Michael’s tremendous power double kick practices and awe-inspiring fills keep “I Am Alive” and “Howl of the Banshee” at energetic, adrenaline-infused levels of excitement, while the 13:12 closer “Infinity” continues the band’s tradition of epic exploration – throwing in everything from calm, cultural musical passages to brutal power assaults, the lead work of Tom Naumann and Alex Beyrodt exhilarating for those technical-minded but never to over the top for conventional followers to treasure.

When you push for the best output from a critical standpoint even before release, you usually end up with a record that will be talked about not just over the next month, but probably for a lifetime. Metal Commando could usurp one of this scribe’s top three albums in the Primal Fear back catalog, as the record flows from first note to last without a drop in quality – and that’s not easy to achieve when you have been at this for decades.