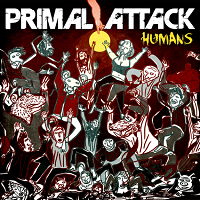 Barely a year old, Lisbon, Portugal’s Primal Attack give a rather obvious nod to American metal of present and yore, meaning they’re a groove/thrash combo. Actually, a further examination into their Humans debut (what’s with the cover, guys?) reveals Sepultura circa Chaos A.D.-like simple metal mongering. Thankfully, the riffs here are effective; borderline boneheaded at times, but one doesn’t walk away from Humans feeling worse for wear. Bonus points for that.

Opening with the barbaric thrash of “Safe and Strong,” Primal Attack find themselves in the crosswinds between Exodus (the main riff is a slight alteration of “The Toxic Waltz) and shout-along hardcore, ala Sick of it All. More brutality comes in the form of “Strange Attraction” where a blistering tempo gets the smackdown from a Machine Head-like groove, while the simpleton “Time to Reset” emerges as the album’s best song (which is odd considering how frumpy the riffs), a result of finding a killer, straight-laced riffing and laying the proverbial smack down, 1994-style.

It’s not far-fetched to picture Primal Attack getting stuck in a creative rut for ensuing albums, the result of having attached their sails to a sound that doesn’t allow for much mobility. For now, Humans hits on all the right spots when it comes to breaking bread with thrash and groove metal, and while the convergence of the two is hardly new or novel, when done right, it can get aggro up in here.