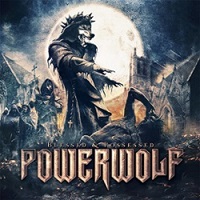 When looking for metal bands who have achieved authentic headlining status in the power genre over the past 15 years, two European groups come front and center. Sweden’s Sabaton is the first, thanks to their relentless touring schedule – and to a lesser degree outside of Europe, Germany’s Powerwolf. Don’t get me wrong- the demand is high for the dark myth and werewolf troop to expand their live outings beyond mainland borders (ProgPower USA requests from followers annually it seems), but for now the makeup adorned quintet has only attained a fervent ‘cult’ appeal here due to this lack of live presence.

Blessed & Possessed is their sixth studio record – and at this point in their career, they are rather content to deliver what the hordes desire. Super addictive, semi-happy sing-a-long choruses, equally strident guitar riffs, keyboards that command more of a church pipe organ tone than conventional, free flowing power bands use, and a rhythm section that keeps the bottom end/ double bass in tandem stride for chanting, stomping, and hand clapping opportunities. The speedier numbers like “Dead Until Dark” and “Christ & Combat” probably gaining most instant appeal, while mid-tempo anthems such as “We Are the Night” or “Sacramental Sister” showcase the band’s melodic penchant, guitarists Matthew and Charles Greywolf cognizant of the right driving chord pulsations and when to let the harmonies reign supreme in the instrumental sections.

Vocalist Attila Dorn has been the major calling card to Powerwolf’s long running magnetism. An operatic tenor, his phrasing and range can stride in unison to the music – gliding up and down the riff parade for “All You Can Bleed” while being a little more traditional oriented for the Priest/Maiden like “Armata Strigoi”. And know going in that clichés abound, dark humor springs forth lyrically, as the final aim is pure power entertainment.

Blessed & Possessed produces another 11 song, 45 minute sermon that regular attendees will relish, as converts seek out fresh faces to bring into the fold. Let’s build this so the band has no choice but to come here…blood, resurrection, and vampires for all!