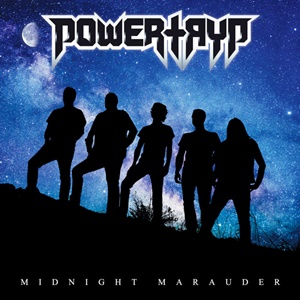 Embracing a long-running power/speed platform with old school values and traditions at the helm, Powertryp have been slugging their way up the German underground scene since 2010. Releasing their debut demo Endless Power in 2015, the quintet spent years getting material just right for this debut record Midnight Marauder. Choosing to seek out legendary producer Harris Johns for the mixing and mastering of this nine-song effort (ten if you include the CD bonus track “Nail Your Prophet”), listeners can expect tones, hooks, melodies, and an attitude that raises fists, causes massive headbanging, embracing an old school philosophy that never wavers for the cause.

Synchronized drum, bass and twin-guitar activities often make for instantaneous passages that garner further attention – the type that put Iron Maiden and the subsequent US power guard on display as “Here’s Control” and “No Pride” illustrate. Early Metallica heads down speed rhythms as well as a straightforward, pounding tempo allows opener “Brothers in Speed” to get the record off to that proper energetic, adrenaline-fueled start – it’s “Whiplash” mentality and metal-oriented lyrical support sure to go down a storm live. The bard-like charm and larger than life falsetto support from Johannes Korda as a singer reminds this scribe of the late great Mark Shelton in spots for the mid-tempo crusher “Doors Are Locked Now” – while expanding horizons in outward emotion on the epic almost nine-minute “Out of Ashes”, featuring extended instrumental spots as well as a thoughtful, bluesy lead break. It’s interesting that the band chose to re-record five of the six demo songs for this record – which could make things interesting to see where they will go direction-wise on the follow-up.

Powertryp balances out obvious US heavy/speed influences with a German working class ethos and finesse that makes for solid songwriting and plenty of memorable moments throughout these songs. Midnight Marauder probably has the best appeal for those who lived through the 80’s movement as teenagers, so crank this up to the max and enjoy.