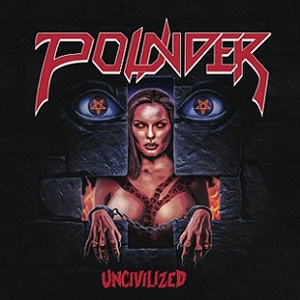 Featuring members of Exhumed, Carcass, and Nausea, California act Pounder rear back into the revelry of metal’s early days with their down and dirty, traditional heavy metal and melodic hard rock style for their first full-length Uncivilized. Since their 2016 inception, they’ve released a demo, single, and EP prior to this – wasting no time in pushing their passion for lethal riffs, gritty vocals, and melody/harmony combinations that revert to those late 70’s to mid-80’s American/British heavy metal heydays.

A lot of the interplay between these musicians showcases a respect and reverence for the carefree youthful exuberance that the genre delivered decades before – hanging their heads and hearts high on familiar twin-guitar action, gang chorus vocals, and a steady supply of double kick activities. Many will be able to point at specific riffs and hooks as earmarks to other familiar artists – a little Dokken and Iron Maiden within “We Want the Night”, a touch Judas Priest there in significant drum rolls for the title cut – while the deliver screams black leather and studded charm. Where Pounder really take a left-field chance is the AOR meets melodic, bluesy hard rock element for the semi-ballad “Long Time No Love” – the acoustic to electric build up and heartfelt emotional chorus giving the dramatic lead break that much more dynamic elevation. The intro instrumental movement for “F..k Off and Die” has that Priest/Vicious Rumors majestic nature before the heads down speed riffing and twin push and pull action plus calmer mid-section turns the arrangement into more of a Motörhead meets Raven/Saxon affair with singalong possibilities aplenty. Rhythm guitarist Matt Harvey has a capable voice, nothing that will put him in the Dio/Dickinson/Halford pantheon but stays within a safe mid-range capacity and occasionally stretching to a slightly higher strained level.

Pounder live up to their moniker, injecting their potent, down to earth music with that level of compassion and togetherness that is necessary for traditional heavy metal to succeed. Glad to see that American musicians are willing to step up and throw down some love for classic metal – trying to give the current generation some more anthems to treasure. 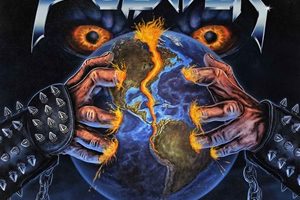