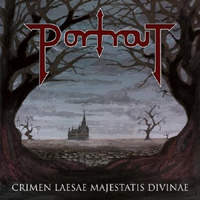 Man, deciding between Ghost, In Solitude, and Portrait for best Mercyful Fate knock-off is tough. Notwithstanding Blistering’s affinity for MF (and King Diamond), there is some solace in the fact that all three are legitimately good bands, with songwriting wherewithal, a trait that’s on full display on Portrait’s sophomore effort, Crimen Laesae Majestatis Divinae.

Intrinsic to Portrait’s sound is singer Per Karlsson, who has a jagged falsetto and isn’t afraid to use it. Just check out “Infinite Desecration,” where the man employs every trick in the King Diamond book (scorching highs, eerie chants, and mystical shouts) to full effect. Said track leans more on Conspiracy-era King Diamond than MF, which is probably why it’s an album standout.

A lush acoustic guitar interlude in the form “The Wilderness Beyond,” is well-placed at the song #3 mark, while the banging “Bloodbath” is a sure-fire MF charmer, right from the opening finger-tapped guitar solo to the double-bass intensive verse where Karlsson yelps like a young King Diamond. Additional highlights including the NWOBHM pulse of “Darkness Forever,” “The Nightcomers,” and the speed metal-infused “The Passion,” which puts Portrait’s killer riff chops on full display.

Like In Solitude, Portrait are an easy fix for the noticeable lack of King Diamond/Mercyful Fate-related releases in the market. Hard to pick which is album is better – Crimen Laesae Majestatis Divinae or In Solitude’s The World. The Flesh. The Devil., but we’ll go with Crimen Laesae Majestatis Divinae, as it has just a smidge less amount of Danish metal worship. It appears the market for this style has been effectively cornered…