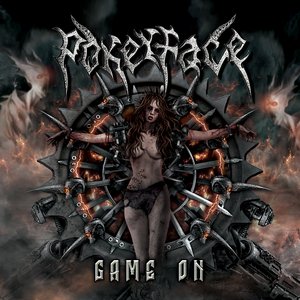 Blame it on Lady Gaga, but there was some trepidation before a reluctant click on the mouse brought up a video from Pokerface. Alas, all of those fearful hesitations were easily quelled with a few seconds of the band’s breakneck sound kicked in. This Russia-based thrash act should leave you with anything but a poker face once you engage their third album Game On.

Aggressive, snarling thrash with modern groove and some melodic moments captures a good image of what Pokerface is all about. A timeless crunch (think Slayer or Kreator) soaks the guitars in enough heaviness for you to immediately take notice, let alone the frequent bursts of energy they provide. The stomping thrash tempos with solid mid-tempo grooves are of the variety that may be somewhat worn in nature, but haven’t lost their ability to charm. It does take much time to observe the abrasion factor in songs like “Blackjack” or “The Fatal Scythe” without wanting to join in on the attack. Vocalist Alexandra Orlova adds to the brutality with harsh screams and growls, but occasionally (see the title track or “Creepy Guests”) breaks into more traditional metal vocals in a move that gives the band a more unique feel. Going along with the more melodic sense of the band, outside of hooky riffs amid the thrashing, you’ll find a fair share of flashy leadwork among the tracks, having a touch of Arch Enemy flair to them. Everything pools together for an experience that is both aggressive and melodic without compromising either side.

Catchy, fun riffs and an explosive energy radiates from Game On. The thrashing attack is visceral and the melodies always hit their mark. If you are in the market for some thrash that can work your neck muscles while you maintain a sadistic grin, Pokerface is going to find some favor with you quickly.