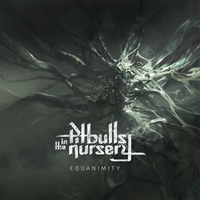 Pitbulls in the Nursery eh? Certainly one of the more odd names that has been tossed around lately, but hey, pickings are getting slimmer by the day and at least there’s some originality to it. Plus, it does have the potential to be pretty gruesome given one’s imagination, so kudos for making people think a little bit. Anyways, Equanimity marks the return of Pitbulls in the Nursery after a nine year absence. With no familiarity with the band’s debut, Lunatic, it’s still safe to say that Pitbulls in the Nursery are doing some pretty cool things.

Some of the more prevalent influences that Pitbulls in the Nursery display are that of Gojira and Meshuggah. Before you all start running to the hills, know that the groovy rhythms that form the basis of the group are often balanced out by more atmospheric segments as well as more progressive death metal components that give a slightly older touch (e.g. Atheist). The mid-tempo polyrhythm chugs have that Meshuggah/Gojira vibe, but due to those additional elements mentioned, it’s easier to digest them and keeps the band from sounding merely like copycats. In particular, the more somber atmospheres that crop up on tracks like “Rule the Plight” and “Reality” are tastefully done and allow for some breathing space without tossing in boredom. The more progressive element of the band shines on the backend of the disc, with “Soulbones” and “Conspiracy” showcasing a more Death-esque quality to the riffing. All of these aspects meld into Equanimity to make the album more than the sum of its parts.

Any original and fresh takes on the Gojira/Meshuggah formula are bound to met with some success and Pitbulls in the Nursery would certainly qualify under that umbrella. It’s got moments of unbridled heaviness as well as moments of ethereal peace, all while maintaining a fluid atmosphere and vision. There’s no rust here after a nine year wait, that’s for sure.