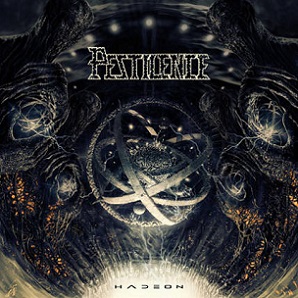 Hadeon marks the second comeback attempt for Pestilence, who for whatever reason, was dissolved in 2014 after the Obsideo album. (Mainman Patrick Mameli replacement band Neuromorph never quite got off the ground.) Obsideo certainly had its moments (“NecroMorph” being one of them), but post-classic-era Pestilence hasn’t provided anything that can compete with the band’s trailblazing early days. Granted, we sound like an old fuddy-duddy by making such statements, but Hadeon, like its predecessor and Doctrine, run into the brick-wall that is technical death metal sterility.

Hadeon finds Pestilence leaning on technicality and finesse, not brutality, which was once a staple of their sound. Mameli remains one of the most fluid guitar players in the scene; his riffs have a tendency to be hyper-connected, retaining an identity that is certainly limited to Pestilence and Pestilence alone. What derails the album and Pestilence as a whole is that compositionally, few of these songs are actually sound, meaning, where the necessitated melodic break and tempo shift should help break up a song, Pestilence never quite finds a way to get around themselves. This shows itself on more than a few occasions, in particular, “Multi-Dimensional,” “Oversoul” and “Timeless,” the latter sporting some flair, but little in terms of dynamics.

While Pestilence’s place in the death metal canon remains secure, their recent output pales in comparison to their less-technical contemporaries, many of whom are releasing far more inspired material. Then again, the argument here is that these bands have largely stayed in the same place while Pestilence has progressed. It’s a Catch-22. Either way, Hadeon upholds the Pestilence name, but not much else. It’s becoming a trend.