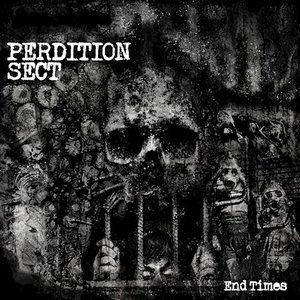 Formed by Aaron Dallisson (Keelhaul) and Matt Sorg (Ringworm) at the onset of COVID-19 earlier this year, Perdition Sect’s goal was to provide fun abrasive tunes in the style of Discharge that addressed our current events (COVID as the possible end times). They rounded up Kyle Severn (Incantation) and Mike Lare (Ringworm) to flesh the band out, and we know sit with End Times in hand a few months later.

End Times dutifully carries the d-beat punk and crafts a finely metal edge to it. Galloping drumwork from Severn and a thick level of distortion and crust to the guitars give it just the right level of abrasiveness without going too far off the deep end, and some aggressive solos and churning metallic riffs pack a potent punch to the whole thing. Subtlety is not what this is all about, and with short 2-3 minute tracks they go for the throat and completely take hold. From the more mid-paced and groovy freight train that is “Bite the Hand” to the raging “Scorched Earth Industry,” it’s pretty much a nonstop assault. At their most furious, such as “Infinite Incarceration,” the riffs and beats simply fly, allowing for maximum impact in the best ways. Even on the slower and groovier closer “Progress of Failure,” there’s still quite a bite to it, with fuzzy hooks that hit as hard as they are memorable.

Nothing like bleak times to create some aggressive music to get you through the daily grind, Perdition Sect are a welcome new force. Energetic d-beat metallic punk that has plenty of get-up and go vibes, End Times is a firecracker of a record. No need for melodrama, just pure unadulterated venom.