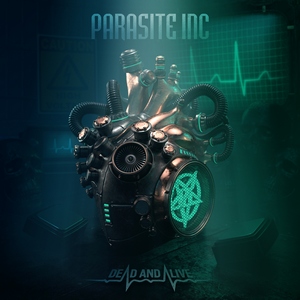 Those with their nose to the ground within the melodic death metal genre undoubtedly still remember Parasite Inc.’s debut, Time Tears Down, from 2013. It’s raging riffs and CoB-inspired synth lines may not have been the most creative of all forces, but they knew exactly how to get the job done with style and enthusiasm. After a 5 year absence, the band has returned with their energetic sound with a bit more diversity in tow for round two.

A sure-fire case of ‘if you enjoyed the previous album, you’ll enjoy this one,’ Dead and Alive keeps all of the pieces that worked for Parasite Inc. last time around and makes them stand out more and ups the flashiness factor. Each track within contains riffs and synth lines (something that has come more into its own this time) that become easily addicting, either for their explosive vigor or melodic sheen. At one end of the spectrum lie tracks like “Headfuck Rollercoaster,” which take no time diving into both groovy mid-tempo riffs and blazing speed (with a bit of intricacy), all the while keeping things remarkably catchy and forward-moving. At the other end of this spectrum are cuts like “Sunset Overdrive” and “Cold Silent Hell,” with the former providing some of the most sleek melodies on the album in standout fashion and the latter meshing some soaring leadwork with punchy grooves. The album ends with a synthwave cover (“Empty Streets”), which works quite well with the band’s sound and enhanced keys for this release, providing one last stream of melodies to embed themselves into your brain before exiting.

Able to bring in heaviness and melody while weaving them together seamlessly, Dead and Alive is an excellent piece of melodic death metal. Parasite Inc. aren’t innovating the style, nor do they need to, but focus on what makes the genre such a pleasure to listen to and end up providing a stronger release because of it.