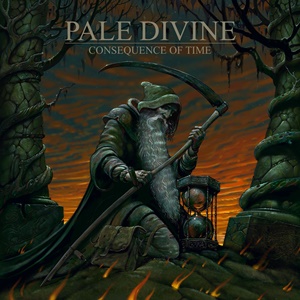 Together twenty-five years, doom metal veterans Pale Divine have expanded to a quartet lineup for their sixth studio album Consequence of Time. Fortunately for drummer Darin McCloskey and vocalist/guitarist Greg Diener, the new member had ties to their previous work in Beelzefuzz years ago – so Dana Ortt would add depth to the riffing and vocals as a second guitarist/lead vocalist beyond the inner trust that he adds to the Pale Divine platform. Choosing to let loose in their wide plethora of doom, stoner, and bluesy hard rock/metal influences, these eight songs captivate through an old school, groove-laden aspect against some spirited guitar passages, solid bass/drum components, and mid-range to slightly higher vocal melodies.

Beyond the Tony Iommi-like charm, there are aspects of everything from Corrosion of Conformity to say Rush or Mountain when you take in the catchy runs and lead break angles of the Diener/Ortt tandem that spin forth in “Shadow’s Own” or the chugging anthem-like “No Escape”. Producer Richard Whittaker gives Pale Divine a primal energy that pulsates from a live on the floor recording aspect, allowing your ears to enjoy the deep bass, natural snare/tom hits, and often distant, soulful nature to the vocals. Highlights are numerous – it’s hard not to be enamored by the opening 70’s-power doom lick that penetrates “Satan in Starlight”, or the slower, clean/distortion switch ups against a mysterious/psychedelic vocal presence for “Phantasmagoria” that lull the listener into a magical, mystical aural wonderland. The title track allows the quartet time to stretch and jam a bit, the instrumental sections of this ten-minute plus cut featuring a bevy of tricks and transitions, including some “Children of the Grave”-like gloom charm. By the time the sledgehammer low-fi churn for “Saints of Fire” concludes on the record, most will find immediate repetition necessary as these 42 minutes fly by quickly in a genre not necessarily as known for any sense of tidy, compact idea construction.

East Coast doom seems to have its own down to earth essence compared to its European counterparts – Pale Divine definitely at the top of their game even after decades parading their wares. The denim brigade with bellbottom jeans and old school musical ethics need Consequence of Time as a permanent part of their record collection.