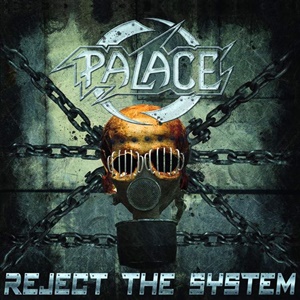 German traditional metal has been a staple of that scene since the 1970’s: acts like The Scorpions and Accept setting the stage for the work of 80’s artists like Grave Digger and Running Wild, keeping the movement alive even to this day. Palace also hail from this fertile ground, arising in 1990 and releasing seven previous studio albums independently or on smaller labels prior to signing with Massacre Records for 2014’s The 7th Steel. The latest album Reject the System sees the group pared down to a trio, with guest lead break support from producer Kai Stahlenberg on six cuts and Atrocity/Leaves’ Eyes Micki Richter for the other four tracks. And while slightly heavier or varied in spots, pretty much Palace sticks to a down to earth, true metal approach that is highly indicative of their older influences and stance in the genre.

It’s fair to say when you take in the mid-tempo riffs, slower and steady double kick/rhythms, and easy on the ears choruses for songs like “Final Call of Destruction” or “Valhalla Land”, thoughts of Judas Priest, Accept, and Grave Digger will easily float through your brain. Lyrically you’ll get a lot of topics relating to mass media manipulation for “The Faker” or the honor, truth, and justice scale prevalent in the warrior hymn “Hail to the Metal Lord” (given the proper keyboard assistance to supplement the main guitars and semi-soaring main melody). Most will find the lead breaks entertaining in that semi-shred meets bluesy manner, “Legion of Resistance” and the slightly energetic follow up “Wings of Storm” two back half outings well worth breaking out that air syncopation tact in the mirror for. Where Palace may have trouble getting out of a ‘cult’ status is the off kilter nature of vocalist/guitarist Harald ‘HP’ Piller. Right away on the first song “Force of Steel” you hear his throaty, semi-whiskey laden delivery – and when he tries to push it to the limits, it comes off even weaker. It’s not quite in the Chris Boltendahl/Grave Digger mold – more like Bernard of Axxis, although many of the choruses here are classic Accept in gang-like fervor, shaping the memorable nature of the songs.

Reject the System isn’t a bad Palace album – it just could have been so much more given the lengthy six-year break between records. Teutonic metalheads will fly the flag higher than most for this.