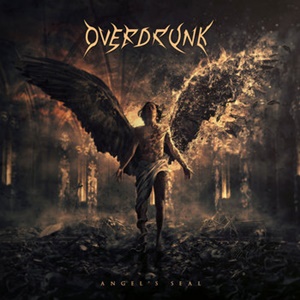 Synonymous with other terms like blitzed, hammered, and plastered, Overdrunk originally hit the scene in 2003 and had a ten-year run with Human’s Enemy from 2006 as a demo and their Agony After Death full-length in 2009. Returning last year, the quartet finally issue their follow-up full-length Angel’s Seal featuring eight full-tracks and a short, atmospheric “Desacration” intro where the band’s brand of groove-oriented thrash with modern/death nuances possesses potent qualities that can gain appeal across a wide array of metalheads.

Dialing in a sound based on a rhythm guitar foundation from Alex Lessard that builds out with melodic accents, the rhythm section supports his work with a mix of groove-based tempos that can be straight ahead thrash-oriented one moment, then pushing the metalcore and modern envelopes the next. Meaning these guys love Arch Enemy and Killswitch Engage one moment, but then profess their love for Kreator and Children of Bodom the next – assaulting the listener with a bevy of styles that streamlines into a highlight aural reel of hooks and tracks that never become monotonous. The speed, intensity, and transitions for “False God” revels in older Sepultura/Grip Inc. pounding, drummer Max Lalante adept at moving through thrash to groove parts without missing a beat, the instrumental sections sure to illicit the proper roar and slam factors live to make the audience adrenalized. The shifting rhythms and tempos for “The Road to Your Grave” make it a midway highlight, a mix of groove metal and older metalcore elements keeping things heavy and catchy. When they choose to accelerate into modern thrash/death parts for the opening sequence of “37 Stories Deathfall”, it gives the mid-tempo foundation more girth. The only disappointment at times lies in the gruff delivery of vocalist Jay Bérubé – while clear in enunciation, his phrasing or mannerisms have a bit of that pirate-like ‘argh’ element that weakens the impact of an otherwise blistering “Burning the Throne” for instance.

Ending on a French-sung note with “Flammes du reel”, Angel’s Seal has solid components for Overdrunk to make inroads in multiple subgenres of metal. One to keep an eye on for the future.