Order of Ennead – An Examination of Being (Earache Records) 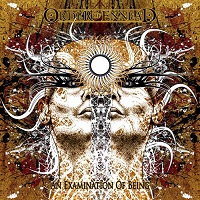 Must be a weird scene for Deicide drummer Steve Asheim to work without Glen Benton, a man whose “antics” have probably done more harm than good for the Floridian death metallers. You never know which Deicide you’re going to get; will it be the brash unit that ripped out The Stench of Redemption or is the clumsy, uninspired act that produced Till Death Do Us Part and In Torment in Hell? At least with Order of Ennead, Asheim’s side-project, you know what you’re going to get: workmanlike technical death metal.

An Extermination of Being is the band’s second album and it takes cues from some of the technical, adventurous angles Deicide took on The Stench of Redemption. Asheim’s drumming is very much in focus here, oftentimes providing loads of snap and pop to above-average numbers like “The Scriptures of Purification” and “Lies Upon the Lips of Judas.” The man always stood in Benton and the (since-departed) Hoffman brothers shadow, but let’s acknowledge his tasteful drumming. He’s quite the skin-basher.

The album’s nine songs don’t provide a great amount of titillation, save for the opening crunch and melodic daggers of “This Mortal Journey,” the sideways, churning riff-action of “Conduits to Eternity” and closing bombardment of “A Betrayal of Self,” a song

that injects some much-needed melody into the proceedings. Beyond that, the album falls prey to technical uniformity.

The problem this album may run into is that it could be too elaborate for the simple-minded Floridian death metal crowd, the same people that go bananas for a simple

down-tuned power chord chug from Obituary. Order of Ennead has clearly taken death metal the same plateau that Cryptopsy, Monstrosity, and now Obscura have taken it. Question is: does anyone want a Deicide member involved with something that doesn’t include blasphemy? Tough call.