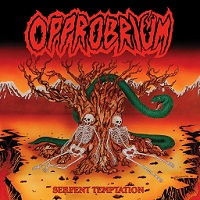 The first band to go under the “Incubus” moniker, New Orleans trio Opprobrium were part of the initial wave of death metal bands who hit the ground running in the late-80s. Unfortunately, the various legal eagles, major label persuasion and more cost the band their initial name, which is yet another sad reminder of how the little guy gets pushed around in these turbulent industry waters. The band (as Incubus) released three albums, the first being Serpent Temptation, which Relapse is reissuing.

Emblematic of the times, Opprobrium’s high-velocity, reckless death-on-thrash approach wasn’t quite the same gamebreaker as some of their contemporaries. The nimble, crunchy persuasion found on “The Battle of Armageddon” is a winner, though, with the band rounding ’em up, circle-pit style. In fact, there’s a certain mosh element to Opprobrium – just check out the whiplash segments that pop up on the title track, or “Voices from the Grave.” The band wasn’t afraid to engage in a groove, or, go balls-deep into the maniacal death metal territory, like on “Underground Killers.” (Special note should be made of the band’s solos, which were clearly influenced by Slayer. Kamikaze all the way.)

Rounded out by a handful of demo tracks, the reissue of Serpent Temptation may not fall under the category of “mandatory,” but like most things, it’s a fun trip. The production, the overzealousness, etc… those were the 80s, man. But ‘tis a shame about the whole Incubus versus Opprobrium name swap. Definitely not beneficial to the short, or the long-term benefit of the band.