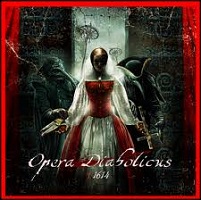 …big everything, pretty much. That effectively sums up 1614, the debut effort from Sweden’s Opera Diabolicus. The album follows in the grand (and grandiose) tradition of symphonic albums of the conceptual nature, this time taking Umberto Eco’sbook

The Name of the Rose and turning it into a full-scale concept. Big ups to the tandem of David Grimoire and Adrian de Crow for cobbling this together…a small undertaking this surely was not.

As the band’s bio rightfully states, 1614 falls somewhere in between the top works of King Diamond, Therion, Kamelot, and Candlemass. Kamelot probably is the band that gets leaned on the most, especially in terms of how composer Grimoire lays out his songs. A lot of the album’s cuts are labyrinthine, with numerous climatic passages, crescendos, and dramatics that reflect Kamelot’s stranglehold on fussy power metal. Holding down the vocal spot is the duo of Mats Leven (Therion, Yngwie) and Niklas Isfeldt (Dream Evil), two well-respected singers

in their own right. All this adds up to a concept album that is big brash, without feeling too big and brash.

With former King Diamond/Mercyful Fate drummer Snow Shaw manning the skins, 1614 retains a highly rhythmic feel, as heard on opener “The Gates” and theatrical “Blood Countess Bathory.” Queensryche is nipped at for the excellent “Forbidden,” while the climatic strands of both “In Memorium” and album closer “Stone By Stone” have a decided extravagant flavor, while staying true to the concept without going overboard.

A cool idea for a band, Opera Diabolicus might be able to shake up the symphonic metal scene if they continue to track down concepts like The Name of the Rose. For a debut, 1614 certainly doesn’t sound like one, yet we’d attribute that to the assembled musicians and their mounds of experience. Above all else, Opera Diabolicus has a legitimate shot at chasing down the soon-to-be-on-hiatus Avantasia and other overly-pompous symphonic metal bands.