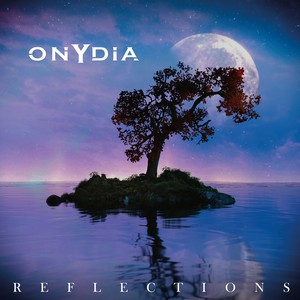 A debut album that manages to push a band further away from the norm is always worth an look or two. Onydia strive to take elements of progressive metal and the operatic/symphonic metal overtones and put them into something out of the ordinary. While there are some perks here, some components just need a bit of work to really elevate the band from the ordinary to extraordinary.

What really works best on Reflections is the emphasis on guitar work. Many bands that advertise themselves in a ‘female-fronted’ act tend to place the emphasis on well, the vocals. An approach that makes sense in many ways but with these bands, there’s a bit of homogeny to them. Onydia feels fresh in this regard. Sure, some other bands place a stronger emphasis on the guitarwork and instrumentation, but it’s clear that Onydia feel they have something to say. The riffs and melodies are intricate and enjoyable, such as the beginning of “The Memory of My Time,” which showcases some floaty prog melodies before the vocals kick in and the volume escalates. There’s more of a mellow tone that follows the band at varied moments too (see “My Paradise”) where they emphasis more key/piano placement alongside Eleonora Buona’s more subdued and sweet vocals. Again, something that feels more unique to much of the landscape of this genre today. However, despite the guitar emphasis, the one piece that stands out as room for improvement is that none of these tracks particularly grab the listener in the way that they could. A punchier number like “The Colour of Nothingness” has the potential to really win over some fans, but the energy just isn’t as palpable as it feels it should be. It’s still a fine track (as with the rest of the release), but there’s just no track with the hook appeal to reel in an outsider.

Reflections is a good and enjoyable album, and a strong debut for Onydia. The nitpicking is more just due to the fact that they have some really great foundations to their sound, and one can’t help but think that with the right tweaks, they could be something really special to behold.