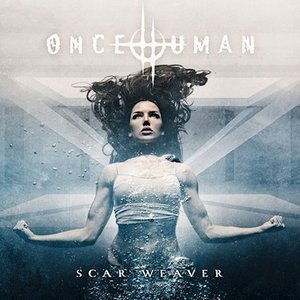 Looking up dates, it’s hard to believe it’s already been five years since Once Human’s second effort, Evolution.  A release that was an excellent step in the right direction and certainly indicative of its title.  But with five years of experience on the road and with more songwriting, Scar Weaver is arguably a bigger step in Once Human’s evolution as a band.  And also a release that modern metal fans are going to find quite a bit to enjoy.

While Evolution really set the band into areas that were less traveled and more their own, Scar Weaver takes that idea and really runs with it.  The songs are more dynamic and varied, moving from massive groovy assaults to more subtle melodic segments, and even some vicious thrashy material to chew on as well.  There’s a genuine flow, to both the songs themselves and the album as a whole, as it runs from beginning to end.  The pounding grooves of “Deadlock” (which also features a reunion between Logan Mader and Machine Head’s Rob Flynn with some guest vocals) run into the more melodic and darkly atmospheric tones of the title track.  The absolutely ripping and thrashy cover of Strapping Young Lad’s “We Ride” is a boost of adrenaline towards the album’s ending, with the more mid-paced and melodic “Cold Arrival” and “Only in Death” wrapping the album with a more serene feeling.  Vocalist Lauren Hart has really stepped up her game with this release, twisting a myriad of different screams and roars, in addition to more confident clean singing, giving the album a more diverse cherry on top.  Check out the cleans on “Bottom Feeder” that immediately shift into potent snarls if you need any further proof, while the guitarwork dances between toe-tapping melodies and jackhammering riffs.

If confidence is key, Once Human are at their peak to date with Scar Weaver.  It showcases how the band has really come into their own sound, favoring punchy grooves and esoteric melodies, with a singer who can deftly handle all the switch ups and provide even more individuality to the mix.  Scar Weaver hits all the right notes for a band that’s been on the rise, solidifying how potent they can be within the modern metal world.