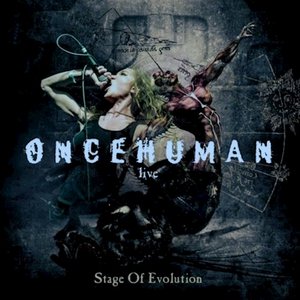 With two albums under their belt, a live album wouldn’t have been the move that many expected Once Human to make. Their second album, Evolution, was quite successful though, and aided in rallying many to the cause – particularly with their much more extreme (and less ‘core-driven) sound. In today’s fast-moving world, perhaps it’s a way to maintain some buzz as they work towards album number three.

With 9 cuts in total, with 7 being from Evolution itself (“Pick Your Poison” is the only song included from The Life I Remember), the title is a fitting one. It puts much of the album on display, and it actually does a great job of conveying the live energy of the band. One of the main tweaks to Evolution was the focus on some hypnotic, groovy riffing and it’s just as strong live (as this scribe had witnessed last spring). The continued flow from recording one show also helps with keeping the live feel intact – vocalist Lauren Hart frequently chats with the crowd, allowing for that “feels like you are there” mentality. Worthy of note for fans is that of the inclusion of Machine Head’s “Davidian” into the setlist as the track has been a bit elusive stateside until just recently and it’s delightfully heavy.

Shut your eyes and picture yourself in the crowd, or stand up and thrash about if you so choose – Stage of Evolution hits exactly the right spots that it should for a live release. In capturing the essence of the band and showcasing their win over each fan mentality (the show itself recorded during their stint with Dragonforce last summer), fans should have no problem embracing this one. Those not hip to the act may not fully appreciate it to the same level due to most cuts being from the same album, but it’s nonetheless an enjoyable effort.