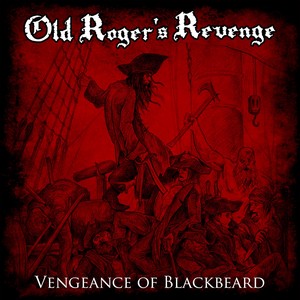 Ahoy matey! Italy’s Old Roger’s Revenge just released their debut offering Vengeance of Blackbeard, and you could be hard-pressed to find a more suitable record for pillaging and laying waste to coastal towns. All through the album’s 12 tracks, the band, which is comprised of Roberto Puissa on vocals/bass, Andrea Marchetti on guitars, and Christian Leale on drums, cycle to multitudes of styles that gives a refeshing take to classic metal tropes. A sonic concoction of sludge, stoner, hardcore, Vengeance delivers the pirated goods in brutal fashion.

“Dead Men Tell No Tales” kicks things off with a tasty hardcore riff signaling their intent to fuck you up. “The Sealane” quickly follows up on the intensity, double-kick drums and chugging riffs reminiscent of some Mastodon during their aptly titled Leviathan era. Imagine the buccaneers throwing their fists up in the sky to this song. Third track “Lies” channels the 90s Seattle grunge scene, and I don’t mean that in a negative sense. If anything, it’s a testament to Old Roger’s competent and mature songwriting skills, if I may say so myself. The hits keep coming, as the tempestuous title track rolls in and obliterates any unfortunate lifeform in its’ path. “Red Moon”, perhaps the strongest song on the record, has got electrifying repetitive riffs that results in a very satisfying collective headbanging for all. “The Workaholic” sustains the charge with its chest-beating bravado, while penultimate track “Lighthouse of Death” combines all the sounds that Old Roger’s Revenge robustly displayed so far in one titanic tune.

Wrapping up the record is “Marooned”, a song as loud as thunderstorms and as jolting as lightning. It’s powerful enough to cause tsunamis, and the same can be said of Vengeance of Blackbeard, a solid first effort for a band who metaphorically equates the pirate lifestyle with freedom of one’s self and mind.