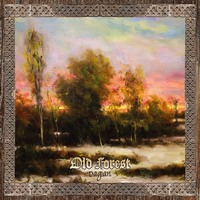 Perpetuators of the grim, black metal aesthetic, followers of Old Forest’s usual tricks might be surprised by their latest output, Dagian. If it’s not apparent from the woodsy, or dare it be said, colorful artwork – this isn’t exactly the grimmest or most frostbitten black metal that your ears have settled in with. While some more raw aspects remain, this one is more of an atmospheric piece.

Lengthy, droning, and almost bordering on doom material is what you’ll get with Dagian. This black metal sticks more to the mid-tempo to lumbering pace as you move across four 10-minute plus tracks. There are some sorrowful melodies that have an almost triumphant feel to them, most notably on “Tweoneleoht,” that do a great job of whisking you away and out of the moment of reality. In fact, some of the droning riffs that appear do the same bit of magic, and this atmosphere is indeed one of the album’s strongest points. The first three tracks also have an almost folky feel at times (not the cheesy/hokey variety of course), and do their part to escalate the atmosphere. In addition to the usual blackened rasps, there are some occasional chanted clean vocals that help to keep the long songs fresh (see “Non”). What doesn’t work, however, is the ending track “Neaht.” 15-minutes of atmospheric droning. The song, if you’d like to call it that, does not go much of anywhere and seems to just be filling out the time element for some odd reason (for reference, it’s the longest song here).

Three satisfying black metal escapades to await when you begin listening to Dagian. Though the instrumental is a bit of a bust, the remainder of the album has some nice use of atmosphere without sounding too clean and polished (nor formulaic).