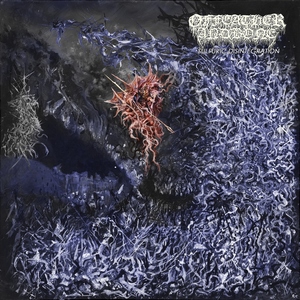 An interesting band to watch evolve, Of Feather and Bone have gone from humble beginnings as more of a hardcore/crust sound into more HM-2 territory on 2018’s Bestial Hymns of Perversion to 2020 and a more primal and malevolent approach. Sulfuric Disintegration is a caustically heavy record that goes all out on bestial intensity, for better or worse.

A slim and trim 6-song, 30-minute effort is what you are going to get here, and it’s a necessarily short experience. The band’s evil incarnate sound is the type that can start to get rather one-dimensional if it lingers on for too long of a time, so a short burst is more effective than a drawn out affair. The sound is truly the album’s strong point, in the fact that it really brings the evil back into death metal. It’s frantic and disorienting for the most part, and what you experience on “Regurgitated Communion” is about what you can expect for the rest of the experience. The songs hover around 5-minutes a pop, usually racing at the fastest speed they can muster, blastbeats and vortex guitar riffs attempting to barrel over anything in the nearby area. The speed has a nicely unhinged quality to it, like you feel like they are about to go off the rails at any given moment as the buzzing intensity starts to elevate in any particular track. Furious guitar solos are the norm, also choosing a more frenetic pacing than a melodic one, adding to the venomous vibes instead of letting the listener cool off. If there’s one negative to be had, much of the material does start to blur together due to the monstrous nature of it all and fixation on primal punishment, but if that’s what you are aiming for, it’s going to be one hell of a ride.

There’s no more fitting a description for Sulfuric Disintegration than that of intense. A whirlwind of a death metal assault that’s bound to leave some jaws open from its purely wicked sound and merciless fury. A real punch in the gut for those seeking it.