Nunfuckritual – In Bondage to the Serpent (Debemur Morti Productions) 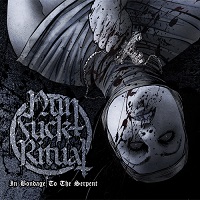 Now that’s an abrasive name, isn’t? The quasi all-star side project featuring new Mayhem guitarist Teloch and Brutal Truth/Nuclear Assault bassist Dan Lilker, Nunfuckritual parlays the type of dissonant and grim black metal that would one expect to come from gentlemen of this pedigree. Unfortunately, Teloch’s (who is the primary songwriter here) aim is way off, and In Bondage to the Serpent never quite finds a rhythm.

Teloch’s submarine-riffs would easily fill up the space with modern-day Mayhem, and it’s refreshing to hear a black metal decide to not go full-throttle. It’s a common tactic for black metal bands to put their foot on the pedal and go for broke with relentless blast-beats, but to their credit Nunfuckritual (it’s really funny to keep typing their name, by the way) manage to find a mid-paced swivel that produces halfway worthy results on the turgid and eerie “Komodo Dragon, Mother Queen.”

Vocalist Espen T. Hangard (Altaar) clearly has Attila Cishar (Mayhem) references in his back pocket, producing un-godly (and partially comedic) noises on opener “Theokotos.” He’s usually buried in the back, occasionally popping his head out only when required. When the tempo finally picks up on “Cursed Virgin, Pregnant Whore,” it’s a little too late, as In Bondage to the Serpent stumbles and staggers through a muddied slope off below average black metal and played-out atmospheres.

Only adding to the spotty record of black metal side projects, Nunfuckritual had better be a platform for Teloch’s throwaway ideas for the next Mayhem, if there even is a next Mayhem album. Nevertheless, little to make a fuss about with In Bondage to the Serpent. Even the name loses its muster at the end…