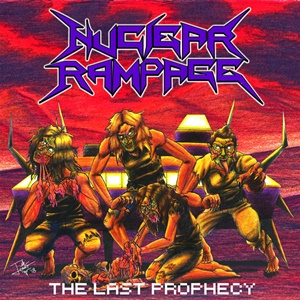 Giving the listeners aggressive riffs full of rage, Nuclear Rampage obviously live for thrash metal. The Last Prophecy is their latest EP and third effort since 2017 – proving that the quartet from Mexico appear intent to let their creative juices fly in a timely manner. There’s nothing subtle about these three tracks (beyond the short 32 second keyboard-driven Stranger Things style intro) as the band live for a take no prisoners, primal form of thrash that contains a boatload of early to mid-80’s influences of the US and German variety.

It’s nice to hear the separation between electric guitar, bass and drums as you’ll discover here – to the point where bassist Karl Hernandez has as important a role a la Steve Harris of Iron Maiden or say Tom from Sodom, most evident on the closer “Human Scum” or the Flotsam & Jetsam-like thickness during parts of “Day of Final Judgement”. These musicians aren’t necessarily going to blow people away through sheer speed or frantic action – they keep the riffs close to the thrash vest, intertwining the heads down verse action with the proper mid-tempo transitions that encourage audience chants or twisted slam action in the pit. As a lead guitarist Gunsar prefers speedier flashes of upper neck flexibility, more in line with what one expects from Slayer where it doesn’t necessarily go hand in hand with the crux of the main musical passages on display. “Terror Invaders” has interesting bar chord meets crossover appeal – the background gang vocal support and atmospheric, almost darkened guitar accents during the instrumental sections making things a bit futuristic.

Rhythm guitarist Jerry Arciniega also doubles up on vocals – his favored delivery running neck and neck to the speed and feel of the verses, which is not necessarily a good or bad thing, but definitely the weakest part of the songwriting as it doesn’t elevate the material beyond basic-level quality (“Human Scum” the clearest example of mirroring the riff too close for comfort). Can’t go wrong with the pointy logo and equally brutal cover though – The Last Prophecy takes care of business in a swift 12 minutes and will find favor with those underground maniacs who keep their feet firm in the genre.