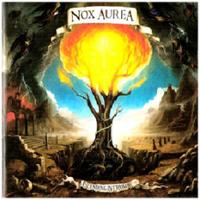 How the word “triumph” ended up in an album title for a depressive doom metal band is puzzling. There’s nothing triumphant about doom metal unless your name is Messiah Marcolin and you’re doom dancing across the globe. Methinks Nox Aurea aren’t quite at that level yet, although Ascending in Triumph proves to have some of the qualities we’d be looking for in a stout doom album.

Following in the trail already set by recent doom mongers Swallow the Sun (perhaps the closest reference point), Nox Aurea display a knack for haunting arrangements throughout this long, sometimes labored 8-song offering. The pre-requisite winding melodies, grunted vocals and occasional female vocal spot are here, all of which lead us to point to “The Shadowless Plains” as being the real highlight here, only because it does the best job of differentiating itself from the rest of the pack.

The main beef with Ascending In Triumph is that by the third song (which “The Shadowless Plains” is), you feel like you should be on the last song. That’s just the name of the game, even if the very Crematory-like “The Delight of Autumn Passion” tries to add some color to the proceedings. In the end, it’s just one massive dark swath of cold, hard, black, doom.

Napalm Records has enjoyed quite the run of late in the doom metal department with Ahab and the 11th Hour further diversifying the label’s roster (remember when the label was just female-fronted Goth bands?). Nox Aurea falls short in the originality department, but in terms of dark doom played properly, this is about as textbook as it gets. Sometimes that’s not a particularly bad thing.