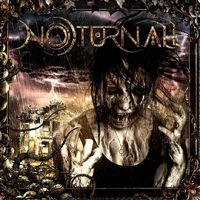 Generally defined by its pristine nature and occasional romp with native elements, Brazilian melodic metal has never quite been able to establish its follow-up band to Angra. Sure, Hibria is perhaps the first name that comes to mind when dealing with such items, but their impact relative to Angra’s demonstrates a noticeable gap. As in, it’s Angra and everyone else. Therefore, simply by association Noturnall deserves a look, boasting Angra’s former drummer (Acquiles Priester) and virtually all of initial Angra spin-off Shaman in their ranks, who since their 2000 formation have changed more than half of its lineup. Surprisingly, Noturnall’s self-titled debut veers off in direction usually not explored in Brazilian melodic metal.

Symphony X/Adrenaline Mob vocalist Russell Allen lent some production help, even popping up on “Nocturnal Human Side,” ever the welcome happening given Allen’s near perfect-fit with anything even remotely related to metal of this style. However, Noturnall isn’t as much of a power/melodic metal band as they are imbued with the same straight-up throttle as another Angra spin-off, Edu Falaschi’s Almah. The down-tuned chug and schizo vocals of Thiago Bianchi certainly cement such a notion, with bruising numbers such as “No Turn At All,” “Zombies,” which in spite of its goofy subject matter, is the album’s best jam, and “Fake Healers,” where upon Bianchi turns in his best moment in the song’s chorus.

This ten-song foray has legitimate promise, even though the band is far from a finished or even a refined product. Surely some regular goers in the melodic/power metal realm may not jive with the album’s rather rough and tumble plunges, yet that’s probably the purpose of forming a new band such as this. The main constituents can always get down with their usual Brazilian flair in their main acts, thus, making Noturnall a legit new band.