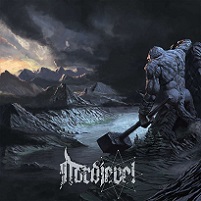 Back in the day (which makes us sound old), a certain gestation and/or demo period was often required for a band to get off the ground, or rather, get signed. Taking one’s lumps was a necessitated happening in order for stumbles not to happen down the road. It’s why a lot of classic bands spent years slugging it out before putting pen to record company paper. ‘Tis not the case for the Norwegian quartet that is Nordjevel, who came to be in the spring of 2015, promptly got to work on a full-length, and hooked up with legendary underground label Osmose. Not bad for a few month’s work.

Borne out of the intention to provide music from the “devilish abyss from the north” (as so stated on their Facebook page), Nordjevel’s black metal approach hinges mainly on overdrive, where upon a cascade of blinding speed and tremolo picking do the heavy lifting. It reaps instant rewards on the album’s opening cut, “The Shadows of Morbid Hunger,” where a diabolical main riff serves as the song’s chorus amidst a barrage of rampant blasting. Yet there’s some flavor to go around, as found on the whirling “Sing for Devastation,” which brings forth some wily chord movements along with an always-welcome melodic undercurrent. Said current reprises itself further down the track listing, most notably on “Det Ror og Ror” and album closer, “Norges Sorte Himel.”

Inasmuch traditional Norwegian sounding this self-titled effort is, Nordjevel have managed to inject layers of finesse and freshness across the album’s nine cuts. While it’s far from a re-write of the Norwegian black metal rulebook, this sort of attention to detail, acute sharpness (especially in the riff department), and smart arrangements will be impossible to ignore. Welcome to the club, gents.