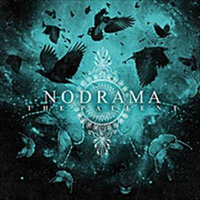 “NoDrama,” eh? Drama is just the worst and it’s become one of those overused words in our lexicon that for some peculiar reason, people can’t say enough. Like “baby mama drama,” or “he said/she said drama” or “my parents are giving me some drama.” The word is probably best left in the annals of daytime soap operas or feature film presentations where drama actually does take place. And professional football, depending on which team you root for. Then again, if you fancy a team that has had four straight years of 10-plus losses, the “drama” usually is taken out of things by Week 8.

At any rate, the poorly-named NoDrama are a five-piece from Spain playing a brand of Raunchy-lite metal that is undeniably hooky. There are stacks of melodies, off-staccato riffing, and pinches of atmospheric keyboards that are part 00’s In Flames and Soilwork. For the well-informed, the picture we painted couldn’t be more clear, yet the real variable here is singer Aimar Antxia, who sounds like Shawn Gallagher of long, long forgotten American metallers Beyond the Embrace (bonus points if you remember them). Antxia blankets these songs with a harmonious buzz that often takes flight in the choruses – just check out “Visions,” “Waiting,” and “The Patient.” Dude can sing like a champ, with no trace of over-pronunciation to be found.

The band displays some muscle on “One More Step,” which has some downhill riffing reminiscent of Textures, while “Power of Lavishness” works thanks to a bed of acoustic guitars and flashy melodies. Further explorations down the Raunchy/Strapping Young Lad path are hit upon during “All Behind” and album closer “Untouchable Treasure” tops off the album nicely, with a flurry of melodies and another creamy chorus from Antxia.

Based on their name alone, expectations for NoDrama were suitably low. Yet their smart and well-executed brand of melodic, European metal should fall right into the laps of those who were still onboard when Reroute to Remain and Figure Number Five hit. Dramatic times those were, too.