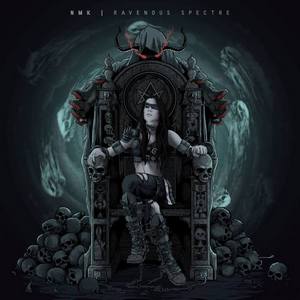 Hailing from Peru, NMK is the latest melodic death act to unleash their debut album to the masses. Three years in the making, Ravenous Spectre takes cues from bands such as Carcass, At the Gates, and Symphony X and inserts them into a frantic yet catchy formula. They are quite dead-on with their own descriptors as well – those who enjoy any of those three acts are bound to find NMK to be a nice addition to the scene.

Clocking in at slightly under 40 minutes (if you ignore the intro/outro), there’s not much time to be wasted, which is to NMK’s advantage. The thrashy, classic melodic death sound (a la the above references) is best utilized by a hit hard and get out mentality, and the first track “Outrage” embodies this exact spirit. Energetic and memorable riffs reign supreme, with a modern and punchy feel to accentuate the classic ingredients. There’s an almost feral quality to the riffing in its fast-moving pace (see “Lack of Judgment”), but the harmonies in the guitar lines and blazing solowork force you to pay attention to the details instead of relying on an adrenaline rush to guide you though. The melodic sensibility comes out a bit more with the mid-tempo tracks, like “Backhand Game,” where darker grooves take the place of the thrashy intensity in an equally gripping way. The other crucial piece of their puzzle is that of vocalist Nathalie Markoch, who switches between a near power metal clean vocal and an utterly demonic roar. The percentages of each type keep it interesting, particularly in firing off the cleans atop more frantic guitarwork – a fresh perspective that the band could easily further exploit in future recordings.

Taking the guns a-blazing approach to melodic death metal, NMK bring a promising debut to the table with Ravenous Spectre. Excellent riffing and leads, alongside a varied and capable front-woman are more than enough to get them off the ground and running. Seeing them take the formatting to the next level should be all it takes to get them to the next level of notoriety within the melodeath scene.

NMK – Nothing Less than Ravenous