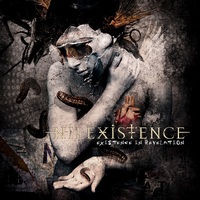 A new up and coming act from New York, NilExistence plays death metal most brutal. Featuring artwork by Seth Siro Anton, and a mix/mastering job done at Hertz Studio by the Wieslawski brothers, don’t expect NilExistence to be the next Suffo-clone. This may be NY death metal by geography, but its design is a bit more global than that.

The band’s debut, Existence in Revelation, sounds great from the headphones. The approach is nothing but professional, far beyond the 2 year existence of the band itself. The brutal death metal that presents itself owes much to the masters, namely Morbid Angel and Immolation in terms of the mid-tempo riffing and dark groove and the Polish intensity of Behemoth or Vader. Some songs go into the pitch-squeals on songs like “If Snakes Words Could Talk.” There’s nothing that’s overtly techy, which is a nice change of pace considering the production values, and makes the album feel more akin to a ‘90s death metal release with a more flashy sound quality. They switch up tempo frequently, moving from blasts to crawls to the already mentioned mid-tempo chugs with ease, which allows them to go further into somewhat lengthier tracks (3 of which hit over the 7-minute mark). They toss some subtle melodies into the songs as well, which works on a track like “To Give is to Serve,” and again allowing the songs to go a few minutes longer without feeling like they are beating a dead horse.

Existence in Revelation is a competent piece of death metal that is more diverse than what you might initially think. It doesn’t pander to trends or what’s hip in the scene, it’s just heavy from beginning to end, without compromise.