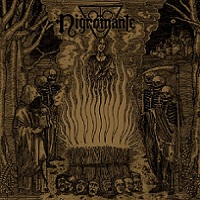 A rare Spanish metal entry, Nigromante have been kickin’ it since 2003, with three demos to their name. Their first full-length happens to be Black Magic Night (maybe they’re referencing the first line in Slayer’s “Black Magic,” eh?), and it’s rooted in the not-so-casual traditional soot of Venom paired with grittier NWOBHM. The simplicity in which the band operates shows they’ve probably hitched their wagon to times of yore a little too much, but there’s this shifty appeal to the album, like, you won’t get something like this from anywhere, or anyone else.

The nine jams that comprise Black Magic Night come easy, even if the vocal delivery of Choco might sound a little too forced, or animated for the average punter. In reality, Choco sounds like a less-pronounced Chris Boltendahl (Grave Digger), which means that when there’s a vocal hook (see: the rumbling cadence in the title track, or “False Idol”), one had better grab it, or it will be gone. So without the function of big-time chorus selections, Nigromante has to rely on their riffs and arrangements, which like we said, are rather simple. Still, the downhill surge of “Saturnalia of Blood” is cool, while the raucous “Satan Death Squad” is brazen, if only for the Venom-meets-The Crown song title.

Essentially a band without flashy chops and top-level instrumentation, Nigromante still manage to put together an engaging, if not halfway unique album with Black Magic Night. A tip of the cap to the band for being distinguishable, a lot of that having to do with Choco’s delivery, but hey, it sure beats being a classic metal wallflower.