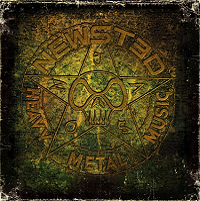 Nice to see Jason Newsted step out on his own; even cooler to see the guy be “the man” instead of the dude who replaced Cliff Burton or a member of Voivod before Piggy’s unfortunate passing. Newsted’s Type A personality predicates such a role, but when you’re in a band with dominant individuals like Hetfield and Ulrich, you’d be lucky to get two ideas on an album, let alone one. Newsted’s self-named act has been working the promotional circuit like no other prior to the release of Heavy Metal Music, making good on his name and serving as an outlet for ideas that in all likelihood, have sat dormant for quite some time.

As the title indicates, Heavy Metal Music doesn’t filter into any subgenre, which will no doubt razzle the mounds of journo’s who have to label everything (us included). If you’re looking for a slot, then perhaps it’s in the down-and-dirty tones of Motorhead, and Metallica’s arena metal moments from the Black Album on. Newsted is more than a serviceable vocalist, those years of manning “Whiplash” have done the man some good, so you can point to jams like “As the Crow Flies” and “King of the Underdogs” as reference points for his skill(z) on the mic.

The meat and potatoes angle of jams such as “Heroic Dose,” “Long Time Dead” and even the doomy “Nocturnus” are worthy cuts, shot right through the heart of what true metal is. Such a straight-ahead effort such as Heavy Metal Music from Newsted should give it some palpability when engaging with the curious Metallica masses. Beyond that, it’s the culmination of a lifetime of work from a man who has seen and done it all, but wants to do more.