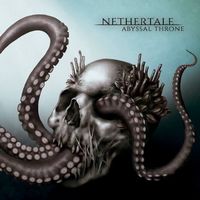 Going from the name of “Big Chocolate” to Nethertale…probably a smart career move. The American Big Chocolate is some hotshot electronic artist anyway, with his own death metal band, Disfiguring the Goddess. Lest we have market confusion over a name. Anyway, Nethertale (which sounds like a power band), were formed in 2011 on the East Side of Spain, and play an otherwise traditional style of melodic death metal culled from the heart of Gothenburg (where else?). In turn, Abyssal Throne is the band’s debut long player.

Trad melo death happenings aside, the album is a conceptual piece from Jabo Garcia, one he plans to turn into a novel. Quite the ambitious approach, especially for a relatively new melodic death metal band from Spain, so hats off to Garcia for giving this a go. (Hopefully he can get a publishing deal in the process.) As for the cuts on Abyssal Throne (of which there are 14, probably in order to accommodate Garcia’s story), they’re pretty dead-on in the middle if we’re looking at the band’s riffs. The whirling “Black Arts Creation” has a strong pulse; “Crown of the Seven Part I: The Man” works its way around thrashy runs; and album closer “Old Man’s Tale” pulls even more from the band’s thrash barrel.

A newer band such as Nethertale usually relies upon their influences as a fallback option, to which is in long supply here. Abyssal Throne is as suggested, is hardly the inventive melodic death metal flair, so Garcia’s storyline and concept will hopefully override any sort of shortcomings found in the musical department.