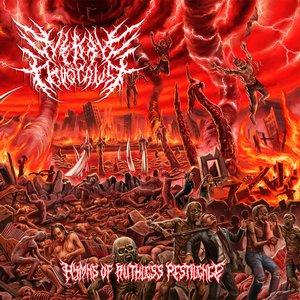 There is something particularly striking about hearing “O Fortuna” as the intro to a metal band’s album, even if it has been done more than a few times over the years. But it’s more interesting that the band in question this time is a slamming brutal death metal band. That’s the initial impression of Nekroholocaust on their first jump into full-length territory (though they’ve been around with several smaller releases). Unfortunately, the rest of the album doesn’t provide as much intrigue.

Hymns of Ruthless Pestilence is brutal and to the point (though when has a band of this variety ever been long-winded). Plenty of groove/slam, plenty of blasting, and all of the uber-guttural subhuman vocals you can handle. They are even kind enough to toss in an “Interlude” halfway through to you’re your brain a few moments rest before the bludgeoning continues. Considering the album in that context alone, it hits the mark about as well as any other within the slamming territories. Originality and variety aren’t to be expected, but they do accomplish the goal of massive brutality quickly and easily. The slams are devastating and they don’t overplay them – they also provide some build-up and dynamic within the songs, which should give them an edge on the competition. But there’s one giant Achilles’ heel that drags the album down. That being the tin can snare, which fires on all cylinders whenever the band picks up the pace. While they aren’t the first (nor the last) band to suffer from it, it’s quite noticeable and does tend to detract from what would otherwise be a more enjoyable listen.

If you can overlook the production issues and frequent tin can snare, Hymns of Ruthless Pestilence does stand neck and bloody neck with the goregrind/slamming death metal competition. It’s a safe release, but well executed. One just hopes that the recording values get a facelift next time around.